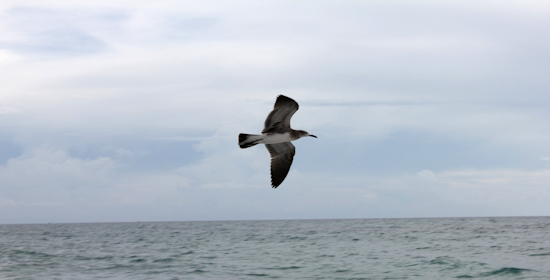 1 Peter 5:8
“Be alert and of sober mind. Your enemy the devil prowls around as a roaring lion looking for someone to devour.”

It’s not uncommon to walk the shoreline and hear gulls squawking to each other. Gulls are reportedly resourceful, inquisitive and intelligent birds, demonstrating complex methods of communication and a highly developed social structure. Most gulls are carnivores, taking live food and scavenging opportunistically.

A comparison could be made between the highly-visible predatory gull and the less conspicuous predacious devil. As the colonies of gulls display their meat-eating behavior, so too does the devil reveal his destructive inclination as he enlists the powers of this dark world and the spiritual forces of evil to thwart the plans of God and malign His children. Satan and his minions are resourceful and capable of executing strategies designed “to steal, kill and destroy” (John 10:10). He is a formidable foe.

In 1 Peter 5:8 God’s word instructs us, “Be alert and of sober mind. Your enemy the devil prowls around like a roaring lion looking for someone to devour.” Busied by the frenzy of life, we live in denial of this truth and lose sight of the fact that we are engaged in a deadly spiritual battle with the devil. As we begin to pray for spiritual wisdom and understanding, God enables us to see the warfare that surrounds us.

Finally, our eyes are awakened to the reality of the pervasive presence of evil, and the wise Christian surrenders self-sufficiency and bravado for dependence and humility, entrusting his life into his Father’s hands. It is in this state of awareness that our Father’s character is revealed and we see Him intervening on our behalf in ways that often defy logic. Only then can we confidently proclaim, “Sovereign Lord, My strong deliverer, you shield my head in the day of battle” (Psalm 140:7).

Spiritual warfare is real, whether we acknowledge it or not. God’s Word tells us, “The secret power of lawlessness is already at work” (2 Thessalonians 2:7). God instructs us to be vigilant and prepared for battle while encouraging us that we are already equipped for combat. Second Corinthians 10:4 reminds us, “The weapons we fight with are not the weapons of the world. On the contrary, they have divine power to demolish strongholds.” We need to persevere so that when we have done the will of God we will receive what he has promised. We do not belong to those who shrink back and are destroyed, but to those who have faith and are saved (Hebrews 10:36, 39).

Heavenly Father, may the God of peace who through the blood of the eternal covenant brought back from the dead our Lord Jesus, that great Shepherd of the sheep, equip us with everything good for doing his will and may he work in us what is pleasing to him, through Jesus Christ, to whom be glory for ever and ever. Amen. (Hebrews 13:20).