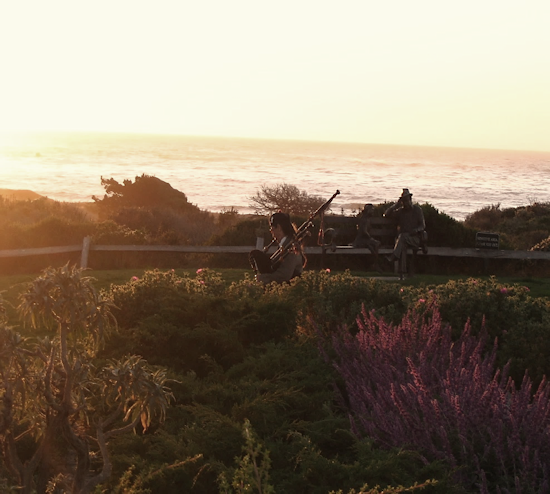 Ephesians 2:8-9
“For it is by grace you have been saved, through faith — and this is not from yourselves, it is the gift of God — not by works, so that no one can boast.”

The Inn at Spanish Bay is nestled among majestic Monterey pines, fronted by a Scottish-style links golf course. The coastline is breathtaking. People gather around fire pits to anxiously await the arrival of the solitary bagpiper, as the sun sets in the western sky. Walking up the fairway, the haunting sound of his pipes mesmerizes and evocatively stirs ones emotions. The glorious sound drifts through the air while the ocean breeze carries the enchanting strains closer and closer. It is a spectacular sight that was made extraordinary because of the piper’s selection, “Amazing Grace,” John Newton’s timeless and most recognizable hymn.

“Amazing Grace, how sweet the sound, that saved a wretch like me,
I once was lost but now am found, was blind, but now, I see.”

It was on a Sunday that I prayed to receive Jesus Christ as my Lord and Savior. My physical birth and my spiritual birth occurred on the same day, 30 years apart. My friends and family did not believe that my newfound “faith” would last, as I was not a person that one would have identified as a candidate for salvation.

I moved out of my parent’s home at the age of 17 and moved into a world that legalized abortion, endorsed sexual promiscuity, and introduced the disco era. The 1977 film Saturday Night Fever aptly depicted the prevailing attitudes and actions of its young adults and I was a “lost” soul begging to be “found.” I was searching for contentment in people, places and things and was left wanting. Blaise Pascal wrote, “There is a God-shaped vacuum in the heart of every man which cannot be filled by any created thing, but only by God, the Creator, made known through Jesus.” Once I surrendered my life to Christ, I found what I’d been longing for. St. Augustine said it best, “Thou hast made us for thyself, O Lord, and our hearts are restless until they find their rest in thee.”

“T’was Grace that taught my heart to fear. And Grace, my fears relieved.
How precious did that Grace appear the hour I first believed.”

My conversion was dramatic. I’d never known love so consuming, so energizing and so fulfilling. Slowly, I felt as though everything in the world was finally making sense. I was consumed with reading God’s word. “Therefore, if anyone is in Christ, the new creation has come: The old has gone, the new is here!” (2 Corinthians 5:17).

“Through many dangers, toils and snares we have already come.
T’was Grace that brought us safe thus far and Grace will lead us home.”

I didn’t anticipate the hills and valleys that characterize the believer’s walk. I clung to Jesus with all my heart, soul, mind and strength but it seemed as though I was battling some unknown entity seeking to keep me imprisoned. At times, I feared leaving my closest companions: fear, guilt and shame, because they were the “devil” I knew. But the ceaseless love of God led me to unfamiliar paths, guiding me out of bondage and into freedom. “He makes my feet like the feet of a deer; he causes me to stand on the heights,” (2 Samuel 22:34).

“The Lord has promised good to me, His word my hope secures.
He will my shield and portion be as long as life endures.”

I rest secure in Him. “No good thing does He withhold from those whose walk is blameless” (Psalm 84:11). “My flesh and my heart may fail, but God is the strength of my heart and my portion forever,” (Psalm 73:26). “I lie down and sleep; I wake again, because the Lord sustains me,” (Psalm 3:5).

“When we’ve been there ten thousand years bright shining as the sun.
We’ve no less days to sing God’s praise then when we first begun.”

Father God, May these words of my mouth and this meditation of my heart be pleasing in your sight, Lord, my Rock and my Redeemer, Amen (Psalm 19:14).