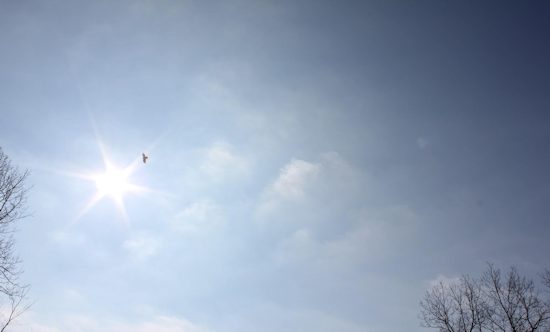 Galatians 5:1
“It is for freedom that Christ has set us free.”

The graceful and fluid bird soared in the winter sky, drawn toward the sun as a moth is to a flame. As it rose in ever increasing spirals it appeared as though it might will itself into the sun. Unfettered it flew through its vast domain with agility and ease. This is how God intended it to be. And God said, “Let the water teem with living creatures, and let birds fly above the earth across the vault of the sky,” (Genesis 1:20).

As I admired God’s handiwork in the creation of this beautiful bird, I thought about the words of Matthew 6:26: “Look at the birds of the air; they do not sow or reap or store away in barns, and yet your heavenly Father feeds them. Are you not much more valuable than they?” What do the birds intuitively know that we’ve yet to understand? I believe the lesson for us is to live in such a way that we are not held captive and enslaved by the cares of the world. We learn to be content in every situation and trust that our Father is willing and able to meet our every need.

According to the National Center of Health Statistics (NCHS) a large number of Americans don’t get this concept. In the NCHS report issued in 2011, the rate of antidepressant use increased in this country among teens and adults (12 and older) by almost 400 percent between 1988-1994 and 2005-2008. Fulton Oursler said it best: “Many of us crucify ourselves between two thieves — regret for the past and fear of the future.”

If the death of Jesus bought our liberty and set us free to experience abundant life, why then are so many of us simply existing from day-to-day, living in misery and discontent? The first part of John 10:10 reveals that, “The thief comes only to steal and kill and destroy.” The Greek word for thief comes from “kleptés,” referring to a thief who steals by stealth (in secret), rather than in the open with violence. Traditional commentaries do not necessarily attribute the “thief” to be Satan as much as representative of all false teachers and religious systems. I’m wondering if the thief is not residing outside of us but actually living within the secret thoughts of our minds stealing away present contentment and tormenting us about things we cannot control and are powerless to change.

Often we cry out as the Psalmists, “Oh, that I had the wings of a dove! I would fly away and be at rest.” God encourages us through the words of Jeremiah 29:11 when He declares, “For I know the plans I have for you, plans to prosper you and not to harm you, plans to give you hope and a future.” These words should enable us to abandon our fears and trepidations, but sadly that is not always the case. Unfortunately, it is often desperate circumstances or situations that get our attention and realign our perspective; we only find rest for our souls when what we hold dear has been stripped away. It is at this time that we experientially understand that God is all we need when God is all we have.

Again, John 10:10 declares, “I have come that they may have life, and have it to the full.” As we relinquish our desperate attempts to control our domain, God gives us His peace. We learn to trust him implicitly and the elusive freedom for which we once yearned, slowly becomes a reality. We gratefully relinquish our days and moments to the One who died to set us free. “We demolish arguments and every pretension that sets itself up against the knowledge of God, and we take captive every thought to make it obedient to Christ,” (2 Corinthians 10:5).

Heavenly Father, your word reads, “I will lead the blind by ways they have not known, along unfamiliar paths I will guide them; I will turn the darkness into light before them and make the rough places smooth. These are the things I will do; I will not forsake them,” (Isaiah 42:16). May we learn to trust you in all situations and rest in the knowledge that your strength is sufficient for the day and your power is made perfect in our weakness. In Jesus’ name. Amen.